Welcome back to my blog and Autumn of Baking series. I hope you enjoyed my previous post, all about my gingerbread- making exploits! They were a huge hit in my household as they were all snaffled up during the week. If you fancy dipping in and seeing how I got on, click here!

As the temperature plummeted this week in the UK, my mind turned to hearty bakes that would keep me fuelled through cold wintery days. Although I love making dainty and delicate morsels, some days just call for a something more. So, this week, I decided to tackle one of my supermarket favourites, a multi-seed loaf.

I love bread. Yes, I know, I love cakes, buns and biscuits too, but my love affair with bread has gone on for longer than any of these. From my school days, when I always chose a small loaf instead of traditional packet of sweets to tuck into after school, to baking my own loaves,  I just love the crunch of the crust and comfortingly pillow-like centre of a good loaf! One of my favourite loaves is a multi-seed, and I have always enjoyed buying a loaf for lunch one day, and then keeping the rest for toast during the week.

This loaf could be seen as more brown and boring, but a good seeded batch is a real joy, particularly spread with lashings of butter. It also has the added benefit of being slightly better for you than a white loaf!

Having never attempted any kind of wholemeal or brown loaf, I was a little apprehensive about making my own. Anytime wholemeal flour is mentioned on Food TV, it is always described as being frankly hard to work with. But having bitten the bullet, I was delighted to find that it wasn’t as tricky as I thought it might be. Although the dough is stickier than a dough made wholly with white flour, it isn’t anything that an extra sprinkle of flour and a little more care can’t fix.

The recipe I chose was adapted slightly from Paul Hollywood’s How to Bake, from a blog post by Christina from scaredycatkitchen.com. It is rather apt that I chose her post, given that I was a bit worried about making a multi-seed loaf! The recipe uses a stand mixer so if you have one, use it, but otherwise it worked just as well for me using my hands and a wooden spoon!

Here is the recipe…

Adding the treacle to the mix…

Slash with a knife before baking

How to make the bake 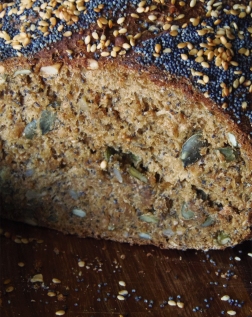 Inside the multi-seed bread

My thoughts about making my first seeded loaf were very positive. Wholemeal flour didn’t turn out to be the nightmare I thought it might be, even when kneaded by hand and not by machine. The finished bread was deliciously seeded, dark and rich from the treacle and had a good crust and moist middle. It was big hit throughout the week as I ate it fresh on the first day, then on subsequent days as toast, and it kept really well in a sandwich bag.

Thank you for popping by to my blog today and joining me as I had a go at making my own multi-seed bread! If you decide to make it yourself, do tag me on Instagram, @englishsingingbaker #esbautumnofbaking.

See you next Wednesday at 1800 GMT for another new bake but until then,